SpyOff is a fairly young Virtual Private Network provider having only been around in it’s current form since 2015, before that the domain was just a random security blog among other things. According to their About Us page, SpyOff is a service by Sareta S.r.l. out of Serravalle, San Marino, a small country located within Italy.

SpyOff has a nice website that doesn’t bombard you with too many flashy colors and distractions like some other VPN sites. Everything about SpyOff’s features and goals are nicely laid out on the home page of the site. There is no publicly-accessible “knowledge base”, but in the Downloads section there is a link to Setup Guides for a wide range of operating systems such as Windows, Mac, Linux, Android, iOS, and routers. However, one thing the SpyOff site is missing are videos and infographics to help the less-informed user learn and decide if a VPN is the right choice.

Currently at the time of this article’s writing SpyOff has more than 335 Severs in 21 countries giving users 300 or more VPN locations to decide between. While their country count is a bit on the low side, SpyOff’s amount of locations place them around the top 20% when compared to other VPN providers – very impressive for their age.

SpyOff’s main focus seems to be Anonymous Browsing, judging by their website, and their VPNs run on 128-bit or 256-bit AES encryption standards. They support OpenVPN, L2TP, and PPTP protocols which make their VPN servers versatile for use on different devices with a wide range of operating systems. Since SpyOff is one of the few VPN Providers that allows unlimited connections, being able to use their VPNs on any and all devices at the same time is a huge bonus!

SpyOff pricing starts out at €9.99 (~$10.84USD) per month making them one of the pricier Virtual Private Network providers, but their services do get cheaper if you pay yearly. SpyOff has a monthly Starter plan, a yearly Premium plan, and a yearly Premium Plus plan that includes usenet access and anonymous support.

SpyOff offers proprietary VPN clients for Windows, Mac, iOS, and Android users. Because I use Windows and Android, those are the clients I have tested.

SpyOff’s Downloads page is pretty straight-forward and easy to find, there’s a link in the website’s footer. The small 8.2MB setup file downloaded fast and I ran it normally, not as an administrator. Installation using the default settings worked fine, which is slightly misleading because there aren’t any advanced installation options. The installer just has the bare minimum options – installation location, and whether to place SpyOff icons on the desktop and in the start menu. SpyOff probably kept it simple to not overwhelm new VPN users right from the start.

When opening the SpyOff Windows client for the first time you must choose between German or English. After choosing a language, you will be able to login to SpyOff using your assigned username and password. Once logged in, just select a country from the scrolling list and click the connect button to start the VPN connection! I like that the SpyOff client gives the ability to choose VPN protocol right on the main window without diving into advanced settings. However, one thing I initially did not like about the client is that the server list only shows countries and there was no way to pinpoint a specific city within a country.

But then I opened SpyOff’s Settings window and found a multitude of options like the ability to select individual servers by city in each country, and I like that option a lot! There are also the normal settings to expect such as starting SpyOff automatically with Windows, auto-reconnect if connection fails, as well as some more advanced settings like DNS Leak Protection and an internet Killswitch that disables all network connections if the VPN connection drops!

SpyOff has packed their Windows VPN client with lots of useful options without making it clustered or confusing. As a whole, the SpyOff Windows VPN client is a pretty solid piece of software. I never experienced any crashes and it worked smoothly without issue, mostly..

There was an issue with the Australia, Singapore, and Switzerland servers when using the client and not choosing servers manually. When I would click connect nothing would happen, I had to exit the client and restart it to get those countries to connect.

Also, during Speed Tests, I noticed another issue while allowing the client to choose servers automatically – some times when I would select a country and click connect, I would end up with an IP address from a completely different country! Luxembourg gave me an Israel IP address, Brazil yielded a United States IP, Sweden gave me a Netherlands IP, and South Korea assigned me what looked like an APO United States IP from a Military Base. I assume this is a client problem and not a SpyOff network problem, either way it is something to watch out for!

The SpyOff VPN client for Android has been downloaded over ten thousand times and is rated 3.6 out of 5 stars. I downloaded and installed it easily without problems. There was one Android security notification during install that needed to be allowed.

After opening the app you must enter a username and password before choosing a VPN Server to connect to. Everything was very clean and worked smoothly. The app did seem to be a bit lacking and without a settings menu to change the VPN client’s options.

Everything about the SpyOff VPN Client for Android worked well and my phone’s IP was masked successfully. However, in future versions of the app I’d be happy to see some more advanced options for those of us that may need them. 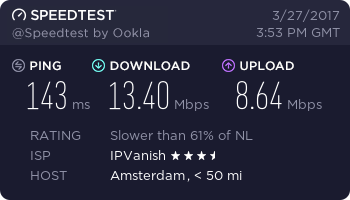 SpyOff is a good company offering a good VPN at a decent price. Their support staff are friendly, helpful, and they reply to questions quickly. Perhaps SpyOff’s biggest advantage over other VPN Providers is the ability to have unlimited devices connected simultaneously, making SpyOff one of the best VPNs to choose if you don’t have a VPN router but still want to connect lots of devices to your VPN. Also, the Windows client’s ability to choose specific SpyOff VPN servers, rather than just selecting a country or city, is a feature not many other VPN providers can boast.

But, to be honest, there are some drawbacks to SpyOff. Speed tests showed that some of SpyOff’s servers are drastically slower than my bare internet connection which could be an issue if I were trying to stream HD media and do other bandwidth-heavy tasks at the same time. Also, along with assigning me IP addresses that were not in the country I had chosen to connect to, I also noticed that some of SpyOff’s servers were labeled “IPVanish” when doing speed testing. It would seem that SpyOff doesn’t fully own all of their server infrastructure and are either leasing IPVanish servers or maybe they are both owned by the same parent company. Still, SpyOff is worth checking out, and if you take their age into account, it is easy to assume they will be continually improving their website, VPN clients, and server infrastructure.

GetFastVPN is a VPN-provider comparison site that may receive compensation from VPN providers linked to on this site.

GetFastVPN is independently owned and the information and opinions listed on this site are neither biased toward nor influenced by VPN providers.